Anti-Calvinism Quote Of The Day

A long-time poster over at Zola Levitt's message board who goes by the screen-name "Littlesooz", has posted a comment in response to a quote from Loraine Boettner. I've looked at this quote all morning trying to figure out how it relates to the quote from Boettner and I can't make heads nor tails of it. Anyway, here is the quote:

Well, I would say that is true if one serves a Ku Klux Clan god.

As I said, I don't see how this relates to Boettner's statements and even if it did, how does this really answer what Boettner was saying? A one-liner like this isn't going to refute anything and only calls into question the credibility of the person posting it. And as I've previously pointed out in reference to similiar statements, this person may very well have to answer for it.
Posted by J. Matthew Cleary at 12:18 PM 1 comment:

Dave Hunt: The Man, The Myth, The Dishonesty

In the reformed communities, Dave Hunt's name has become synonymous with such terms and phrases as, misrepresentation, ad hominem, charicature, poor research, and dishonesty. This concensus stems largely from Dave Hunt's polemical work entitled, "What Love Is This?". This work hit the bookshelves in 2002 and almost immediately, James White of Alpha and Omega Ministries began the tedious task of documenting the errors that permeated the pages of "What Love Is This?" (hereafter referred to as WLIT). It wasn't long before Dave Hunt's own ministry began to lose revenue due to WLIT and eventually was forced into publishing the work himself thru his own ministry due to his publisher refusing to put out the second edition. Amazingly, Hunt has recently released a third edition of WLIT despite the fact that he is still being forced to self-publish the book.

Now, as mentioned above, James White has documented many gross errors contained within WLIT (both first and second editions) and others that have sprang from Dave Hunt's ministry and writing. Some examples of White's documentation are:

After reading thru these examples coupled with listening to White's audio files, one wonders how anyone in their right mind could endorse Dave Hunt's work. Indeed, I was surprised to find an individual recently who not only bought WLIT, but was aggressively defending both Hunt and his book. And what's sad is that no matter how many times Hunt's errors are demonstrated, this individual believes Hunt to be right and everyone else to be wrong including Laurence Vance whose criticism on parts of WLIT was written off by this individual as being biased.

Also, this person at one point linked to a Q & A section of Hunt's site in which I found this interesting tidbit:

Sadly, with few exceptions, most of the Calvinists who write to me make similar unsupported charges. For example, see James White's response to my book, What Love Is This? -Dave Hunt

This statement was made in response to a letter Hunt receieved that was critical of his work in regards to Calvinism. The charges made against Hunt are similiar, if not identical to many of White's own criticisms of Hunt. Yet, Hunt says that not only are the charges unsupported, but White's charges are equally unsupported. Undoubtedly, Hunt is referring to White's open letter that was written and posted to White's site soon after WLIT was released. And as anyone can see, White's open letter (which is also linked above) is lengthy and full of documentation of White's charges. In light of this, I dare say that Hunt's statement above is a bold-faced lie. There simply is no other way of looking at it. For Hunt to dismiss White's open letter as "unsupported charges", is outright dishonesty on Hunt's part. It is precisely this, coupled with the documentation on James White's site, that justifies and strengthens the reformed community's opinion of Hunt and his work. And it is this sort of thing that is ignored and/or explained away by ardent supporters of Hunt such as the aforementioned individual. Indeed, since White's documentation shows Hunt to be immune to correction, can we really expect Hunt's supporters to be any different?

I love Star Trek. Specifically, I love the "Next Generation". I remember one of the earlier episodes in which Captain Picard, while on board his previous ship, the Stargazer, had been brainwashed into believing that he was re-living a past battle in which he was forced to destroy an attacking ship. During that battle, Picard came up with an unorthadox maneuver that would eventually be labeled, the "Picard Maneuver", a tactic that had no known defense. So while brainwashed and still aboard the Stargazer, Picard believed that the Enterprise was the attacking ship from the past and was preparing to repeat his patented maneuver. But as one may guess, the crew of the Enterprise did figure a way out of the whole situation and they went on to explore the galaxy happily ever after.

In like manner, non-Calvinists and unbelievers alike will employ the "Servetus Maneuver" whenever they are faced with Calvinist opposition. This tactic is often used as a last ditch effort when confronted with superior argumentation or, in place of an argument to begin with because everyone knows the "Servetus Maneuver" cannot be defended. Or, so the non-Calvinist assumes. The problem with the "Servetus Maneuver" is that those who employ it have great difficulty answering the question of just why the burning of Servetus automatically falsifies Calvin's theological viewpoints. The main thrust of this tactic is to paint Calvin as being as tyrannical and blood-thirsty as Vlad the Impaler himself, so that anything and everything about the man was just wrong. But even if it be granted that Calvin was a religous Hitler, the logical fallacy remains. The one employing this tactic is still left with refuting Calvin's views biblically. At any rate, both Steve Hays and Gene Bridges of Triablogue have recently addressed the issue of Servetus and everyone is encouraged to peruse their handling of this issue.
Posted by J. Matthew Cleary at 7:27 AM 5 comments:

An anonymous commenter going by the name "Pelagius", visited my blog recently and posted his thoughts on a particuliar entry of mine, and on Calvinism in general. Here is what he said (with my comments interspersed):

I laud you for your intellectual honesty even though I am a Finney Presbyterian and disagree with your theology.

A Finney Presbyterian? Didn't that used to be an oxymoron?

As you point out in your post, most Calvinists deny that under their system of theology; which is predicated on the Eternal Decree; God is according to Reformed theology - the author of sin.

Pelagius seems to think that I believe God to be the author of evil whereas, most Calvinists do not. But what I stated was that, while Calvinists deny that God is the author of evil, they will admit to God being the ultimate cause of all things and that nothing occurs but by His will. As I pointed out in my last blog entry, Calvinists use the term "author" differently in theological contexts. The Westminster Confession of Faith states:

God from all eternity did, by the most wise and holy counsel of his own will, freely and unchangeably ordain whatsoever comes to pass; yet so, as thereby neither is God the author of sin, nor is violence offered to the will of the creatures, nor is the liberty or contingency of second causes tatken away, but rather established...

I, and every Calvinist author I have read affirm these words. So what Pelagius fails to do is to address how the Calvinist defines the term "author" in theological contexts, and also fails to address the distinction between *primary* and *secondary* causation. Since Pelagius offers no argumentation to these distinctions, nothing further need be said here.

Calvinism is a system of necessity and precludes any liberty, free will, free agency or second causes.

Yes, Calvinism is a system of necessity but it does not preclude liberty, free-will, or free-agency. What Pelagius is doing here is smuggling in his views of Libertarianism and human autonomy under the guise of these terms. He fails to mention the competing theories of man's will such as Compatiblism. Like most non-Calvinists, Pelagius assumes his particuliar theory of man's will without benefit of argument.

When theologians attempt to get around this logical truth, they create a host of philosophical and logical problems and inconsistencies.

Notice how Pelagius proceeds to criticize Calvinism based on his unsupported assumptions of how free-will and liberty are properly defined. This is the fallacy known as "question begging".

Surprisingly Hodge's Systematic Theology is full of contradictions and errors - all because he wants to maintain the concept of free agency and free will;

Notice again how Pelagius does not offer us any examples of Hodge's supposed contradictions and errors. Though I haven't read Hodge's Systematic Theology, I assume that Hodge at some point affirms free-will and free-agency but defines these terms according to deterministic/compatiblistic thinking. If so, then Pelagius is still begging the question because he hasn't bothered to demonstrate just why Libertarian free-will is correct and why compatiblistic free-will is in error.

"I must admit, the scriptures that you have quoted do not charge God with sin."

Nor did I mean for them to. The verses I briefly examined address God's relationship to evil. I have never claimed that God sins nor do I know of any Calvinist who has. Undoubtedly, Pelagius means to say that he disagrees with my assesment of the verses covered in my article. But again, he offers no argument which causes me to wonder what this fellow's purpose was in posting this response since without supporting argumentation to the assertions made, it is pointless.
Posted by J. Matthew Cleary at 7:25 AM 6 comments:

The Face of Evil 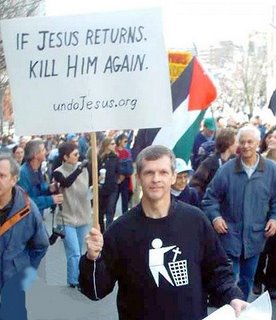 The wrath of God is being revealed from heaven against all the godlessness and wickedness of men who suppress the truth by their wickedness, since what may be known about God is plain to them, because God has made it plain to them. For since the creation of the world God's invisible qualities - his eternal power and divine nature - have been clearly seen, being understood from what has been made, so that men are without excuse. For although they knew God, they neither glorified him as God nor gave thanks to him, but their thinking became futile and their foolish hearts were darkened. Although they claimed to be wise, they became fools... Romans 1:18-22 NIV

These will wage war against the Lamb, and the Lamb will overcome them, because He is Lord of lords and King of kings, and those who are with Him are the called and chosen and faithful...For God has put it in their hearts to execute His purpose by having a common purpose, and by giving their kingdom to the beast, until the words of God will be fulfilled. Revelation 17:14 & 17 NASB
Posted by J. Matthew Cleary at 10:07 AM 5 comments: